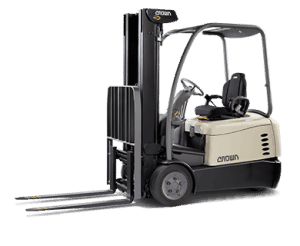 Crown Equipment Corporation is the fourth largest forklift manufacturer in the world. It has corporate headquarters in New Bremen, Ohio, with additional offices in Germany, Australia, and China. The company employs more than 14,100 employees worldwide.

Its products and facilities focus on reducingyy waste and maximizing lifespan. The company has four zero-landfill-status facilities.

In addition, Crown’s machines offer technology to improve productivity, decrease risk, and reduce operator fatigue. Automation helps operators maintain a steady pace, making them more efficient. The machine does most of the positioning, allowing the operator to focus on what they’re moving. Crown’s QuickPick Remote Order Picking Technology earned the 2014 International Forklift of the Year Award. Their Auto Positioning System can increase productivity up to 25% by guiding the forklift along the most effective route instead of always in a straight line.

The Crown Insite Productivity Suite gathers telematics data for fleet and operator management. FleetSTATS is a paperless work order management system for tracking maintenance records. InfoLink is a wireless solution that collects data on fleet truck activity and energy consumption so facility managers can see what’s going on at all times.

It’s worth noting that Crown also offers warehouse design services,y outfitting them with equipment and supplies. Crown recognizes that equipment is only as safe as the operator, and offers tools and resources for company training departments to teach employees about equipment use and safety.

Crown focused on design and operated in niche markets, and its reputation for quality equipment spread. Then Crown became part of the Industrial Truck Association and opened a plant in Australia.

By 2000, Crown stopped making antenna rotators altogether as the demand for lift trucks continued to increase. Since then, Crown’s TSP6000 Series won the Red Dot Design Award. The machine reaches high warehouse shelves to access material that was previously hard to reach.

Crown Forklifts is privately held. Carl and Allen Dicke founded Crown Controls in 1945. Jim Dicke II ran the company from 1980 to 2002. The business is still family-owned today. It is currently run by Jim Dicke III.